Brian Whelan grew up in London, of Irish parents. After his training at the Royal Academy of Arts, he lived and worked in the East Anglia area of England near the North Sea for over 25 years. Brian’s journey as an artist began its definitive gateway just outside his own studio door, in the medieval churches and dwellings of East Anglia. The vestiges of the medieval art form resonate with Brian’s Irish Catholic roots, back to a time when there was one church and from its painted walls great stories were told. His oeuvre, like much medieval art, depicts a sublime comedy of life’s glories and tragedies.

In addition to painting religious subjects, Brian also feels compelled to paint London, the city of his birth. He has discovered that only from the safety of his studio in the countryside can he produce these cityscapes as if memory proves to be the only way the vast subject matter can be put into a work of art. He accomplishes this by using multi-perspectives and contradictory scales, bending, twisting and organizing the urban chaos into harmony.

Since 2013, Brian and his American wife, Wendy Roseberry, have split their time between the US, the UK, Spain and Ireland. Mandell’s Gallery on historic Elm Hill in Norwich, England represents and exhibits Brian’s work in the UK. Westport Road, Connecticut is the new location of Brian’s home and studio. Contact Wendy Roseberry to visit. Brian is a member of the notable Silvermine Artist Guild also in Connecticut.

The year 2021 was busy with the publication of two books and exhibitions at three institutions of learning in Pennsylvania: Pauly Friedman Art Gallery at Misericordia University, Verostcocenter at St Vincent’s College and the Chapel of Christ the King, at King’s College.

During the COVID-19 pandemic, home and studio were relocated to Connecticut and Brian’s play, A Tragic Carmody was published.

During the summer of 2019, the Belgium exhibition at the Cathedral of St. Michael and St. Gudula of Brian’s ‘The Passion of Edith Cavell’ was to mark the Translation of Edith’s body from Brussels to Norwich cathedral. Learn more about the life of Edith Cavell. In 2018, Brian was profiled on the Sacred Art Pilgrim website. At least 8 of his works are among the prodigious collection of John Kohan. That same year, Brian's play, "A Tragic Comedy" was staged in March by Green Curtain Theatre Company in London.

2015 was devoted to Brian’s ‘The Passion of Edith Cavell’ exhibition, a commission from Norwich Cathedral. This international tour began in Washington DC at the National Cathedral in 2014, with a stop in early summer 2015 in Brussels and its final resting place and installation at Norwich Cathedral during September and October 2015, the 100-year anniversary of Edith Cavell’s execution.

The Exchange written by Brian and Jeff Frohner (Paster, Lutheran Church of the Resurrection, Marion Iowa) was published in 2011. In 2012 Brian showcased his cityscape paintings at the Royal Opera Arcade Gallery on Pall Mall, St James, London during the summer Olympics in a show opened by the Popes Band with three songs 'live and unplugged'. Also in 2012, Agenda Editions published An Unscheduled Life with words by award winning poet Joseph Horgan and drawings by Brian and Brian contributing to the group exhibition 'Art Alive' in honor of the late Mary Fedden at the Chelsea Westminster Hospital…also known as the 'Tate Hospital'.

It’s as if a medieval stone mason had been given a box of paints.

2010 was devoted to an international tour of The Quiet Men with works inspired by the London-Irish diaspora. The tour began at West London’s PM Gallery, where award winning journalist Fergal Keane opened the exhibition; moved on to the Celtic Fringe show at the Liceo de Noya Institute in Galicia Spain; and the Villanova University Art Gallery in Philadelphia. The tour was accompanied by the publication of the London Irish Painting Book by the Irish Embassy and Irish World Newspaper. 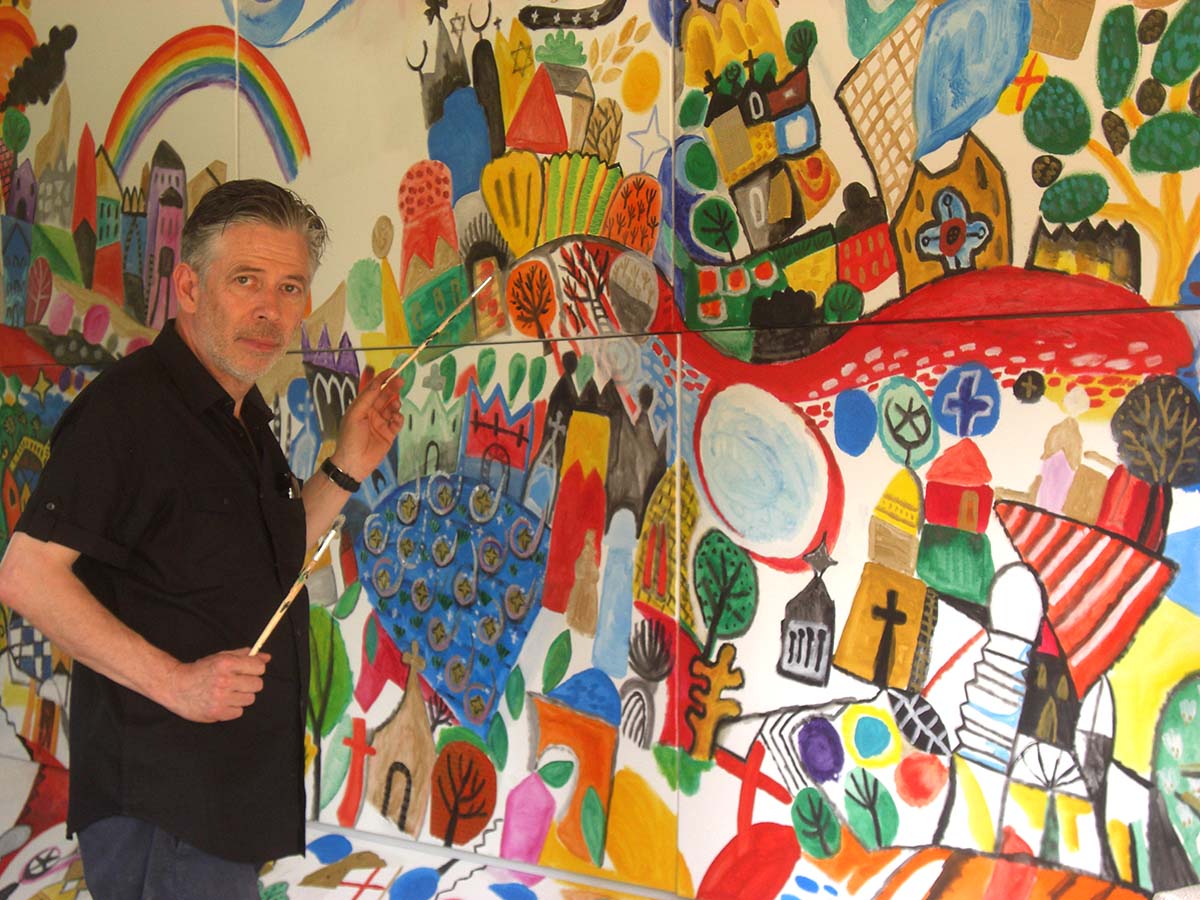