Thirteen commissioned paintings for Rev. Dr. John Roberts will premiere at the John Roberts Festival, then embark on an international tour.

Brian has been commissioned by the Rt. Rev. Paul-Gordon Chandler, the Bishop of Wyoming, and the Episcopal Church in Wyoming, to produce 13 paintings about the life of Rev. Dr. John Roberts, the renowned Welsh Anglican missionary-priest, and Robert’s remarkable ministry among Native Americans on the Wind River Reservation in Wyoming.

This commissioned series of paintings will premiere at the John Roberts Festival in Ft. Washakie, Wyoming on June 3, 2023, and will then embark on an international exhibition tour, first to museums throughout Wyoming, then at Episcopal cathedrals in the US, and finally to Wales in partnership with the Anglican Church of Wales. Following the tour, the paintings will then be on permanent display in Wyoming.

The unique exhibition will premiere on the 140th anniversary of Rev. Dr. John Robert’s arrival on the Wind River Reservation in Wyoming, in 1883, where he ministered for 66 years among the Eastern Shoshone and Northern Arapaho tribes. Beyond commemorating the extraordinary life and ministry of Rev. John Roberts, the exhibition will also draw attention to the importance of learning from the spirituality, culture and worldview of our Native American sisters and brothers. 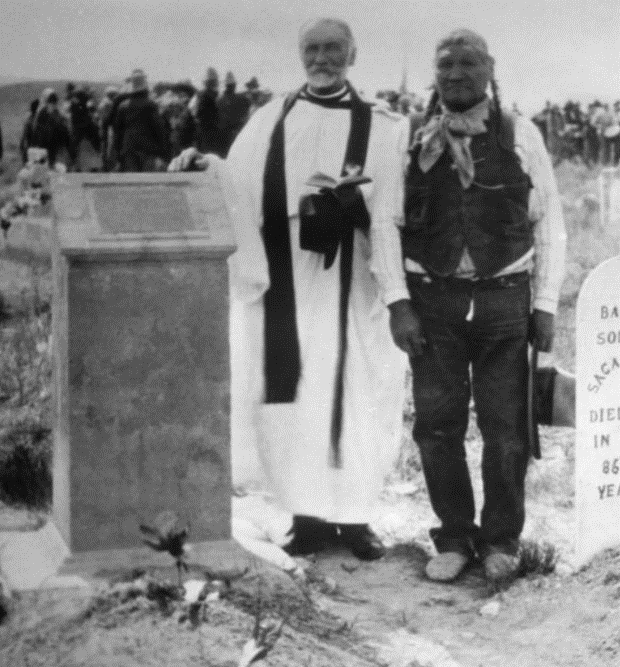 Rev. John Roberts was born in Wales in 1853, and while training for Anglican ordination felt called to serve among his Native American sisters and brothers in North America. Following a brief time of service within a leper colony in the Bahamas, he began his ministry on the Wind River Reservation in 1883. Not long after his arrival, he conducted the funeral for Sacagawea, who as a young Eastern Shoshone woman, was the celebrated guide on the renowned Lewis & Clark expedition.

As a missionary-priest, Roberts was well ahead of his time, as he encouraged Native American expressions of Christian faith, embracing and honoring tribal culture, and traditional indigenous rituals and customs. He cultivated close friendships with tribal leaders, including the renowned Eastern Shoshone Chief Washakie and Northern Arapaho Chief Black Coal, and was referred to with deep affection as “White Robe” and "Elder Brother.”

If there were negotiations with U.S. government officials, the tribes would not proceed without John Roberts being present. His work led him, with the assistance of tribal leadership, to establish two schools on sacred land gifted by the tribes. One of the schools was for girls and is on the National Register of Historic Places. Roberts died in 1949 at the age of 96, and the Eastern Shoshone and Northern Arapaho honor his legacy to this day. Wyoming's state flag is flown at the National Cathedral in Washington, D.C. in his honor. Rev. Roberts is honored with a feast day on February 25 in the liturgical calendar of the Episcopal Church.